Universities, as centers of innovation and educational institutions for future decision makers, have a significant role to play in the implementation of the UN Sustainable Development Goals (SDGs).

In the second project phase, the main focus of UniNEtZ is on making contributions to the transformation of society toward sustainability. In order for universities to credibly live up to this claim of being pathfinders of societal transformation, they must first undergo a transformation process themselves. 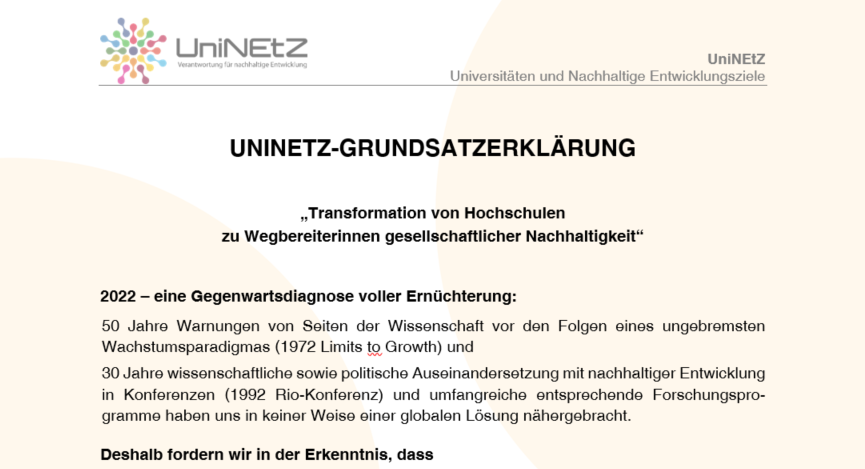 Further informations about the UniNEtZ Policy Statement may be found here. 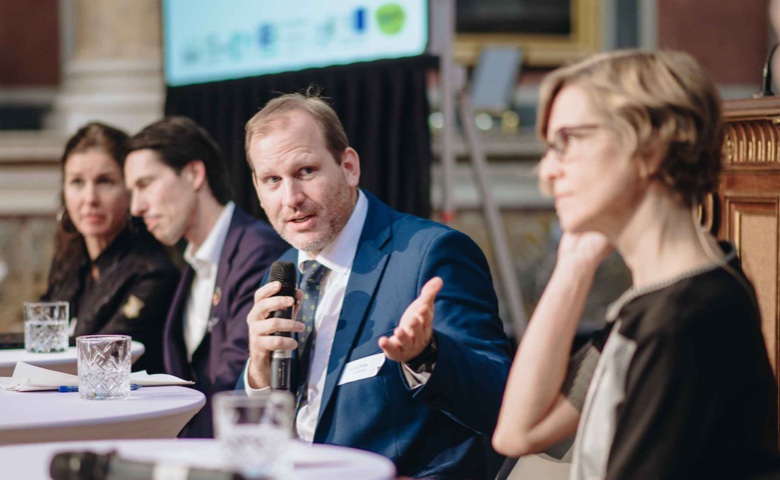 With this motivation, “Allianz Nachhaltige Universitäten” has developed a joint project under the title “UniNEtZ – Universitäten und Nachhaltige Entwicklungsziele”. In this project, the partner institutions take on so-called sponsorships and co-sponsorships for the SDGs. A sponsorship means that the institution coordinates and compiles all knowledge and activities throughout Austria on the respective SDG. Participation describes the content-related collaboration on a specific SDG. Through these intensive collaborations and professional engagement with the SDGs, all contributions are collected, critically examined and coordinated with each other in order to work on the development of an options paper in the period 2019-2021. This is intended to support the Austrian government in implementing the Sustainable Development Goals. The options paper to be developed does not represent recommendations for action, but is intended to identify and evaluate options (future-oriented solution paths with their respective consequences). The universities make their know-how available by means of the options paper. Any concrete contribution of the universities to the implementation of the SDGs by Austria is welcome. "By Austria" means what Austria can do to meet the commitments it has made by signing the SGDs.

In addition, the project focuses on networking between universities and embedding the SDGs in research and teaching. Key requirements for successful contributions to the implementation of the SDGs are: Comprehensive systemic approaches, continuous science-society policy dialogue, and collaborative international and national cross-university collaboration.

The UniNEtZ project has the following objectives:

1. Developing a systemic view of the SDGs and a coordinated catalog of options on how Austria can implement the SDGs.

3. Creating added value through cooperation and recombination of knowledge.

4. Interdisciplinary networking within and across universities

5. Interaction with stakeholders from politics, administration, business and civil society.

7. Building competence for the issues raised by the SDGs among teachers/researchers and students

8. Establishment of a coordination office for the WGs and an explicit contact point for stakeholders at universities.

The special feature of UniNEtZ is that scientists from diverse disciplines join forces to contribute to the implementation of the SDGs. Just as the SDGs are interconnected in many ways and can only be implemented in an inter- and transdisciplinary manner, UniNEtZ represents a broad spectrum of expertise from social sciences, natural sciences, technology, art and music.

The UniNEtZ Council is the highest decision-making body. In the UniNEtZ Council, each partner institution involved in the project is represented by a person delegated by its management. Each delegated person has one vote, independent of the sponsorships or participation of the associated institutions.

The Scientific Advisory Board (SAB) is composed of representatives of the scientific community and accompanies the project both scientifically and strategically-politically. Currently Nebojsa Nakicenovic (IIASA), Sigrid Stagl (WU Vienna, Department of Socio-Economics) and Markus Vogt (LMU Munich, Chair of Christian Social Ethics) and are part of the SAB.

The UniNEtZ-Coordination manages the operational process of the project. It is the central contact point for all UniNEtZ committees and their members.

Coordinators of the individual partner institutions are optionally appointed by the respective institution. They coordinate all activities that take place at their institution regarding UniNEtZ.

The SDG committee consists of the heads of the sponsorships and the heads of the participations. It works primarily on content and methodology with the purpose of coordination between the SDGs. At the level of the SDG Panel, the options report is developed.

The SDG groups work on the content of the respective SDG and develop options to contribute to the achievement of the SDGs. In doing so, the SDG groups consider the multiple interactions with other SDGs.

Students are involved at all universities participating in the UniNEtZ project. The involvement takes place via the association forum n, which is committed to a sustainable higher education landscape in Austria in the spirit of sustainability.

Working groups are established upon proposal of the LA and by decision of the UniNEtZ Council or the SDG Panel as needed, either permanently or to solve specific, time-limited tasks.

Building on the Millennium Development Goals (MDGs), at the UN Summit in New York in September 2015, all member states committed to work towards the implementation of the 17 global Sustainable Development Goals (SDGs) at international, national and regional levels by 2030 ("Agenda 2030"). The European Union (EU), which sees itself as a driving force in the development of the 2030 Agenda, is committed to implementing the SDGs in both its internal and external policies. For example, in its conclusion of June 20, 2017 - 10370/17, the Council of the EU emphasizes that sustainable development is at the core of European values and is therefore an overarching goal of the EU.

In Austria, all federal ministries were committed to the coherent implementation of the UN Agenda 2030 and the SDGs in a Council of Ministers decision of January 12, 2016. Austria plans to present its National Implementation Report 2020 to the UN High-level Political Forum (HLPF) in New York. Furthermore, the eighteen-month program of the three EU presidencies Estonia, Bulgaria and Austria (July 1, 2017 - December 31, 2018) explicitly formulates the implementation of the 2030 Agenda (17 Sustainable Development Goals) as a priority issue.

Subject and purpose of the cooperation

The project UniNEtZ is a project of the universities listed in Annex 1, initiated by the “Allianz Nachhaltige Universitäten in Österreich” (“Allianz“), in which a total of 14 universities have joined together since 2012 to form a platform. The goal of the UniNEtZ project is to prepare an options paper for the Austrian federal government that identifies and evaluates future-oriented options for action in terms of the implementation decided by the Council of Ministers. As a short-term interim goal, this is intended to support the Republic of Austria in its commitment to report to the UN High-level Political Forum (HLPF) in spring 2020. At the same time, however, the focus is on the implementation of sustainable development in Austria as a goal. This results in desired synergies - e.g. improved interdisciplinary networking and increased cooperation between universities and the non-university research institutions or subordinate departments that are particularly relevant for the Ministry of Science - and the joint identification of research needs and options for action.

Therefore, within the framework of the currently pending performance agreements between universities and the Federal Ministry of Education, Science and Research (BMBWF), the obligations arising from the Council of Ministers decision of January 12, 2016 regarding UN Agenda 2030 and SDGs will be considered and anchored in the universities.

First of all, it should be noted that Austrian universities and higher education institutions are well to very well positioned in the field of sustainable development in an international comparison (Europe and worldwide), both in terms of teaching and research. The Alliance functions as a cross-university network with multi-layered activities. In this respect, the project "UniNEtZ", which is currently being run by the Alliance, should be emphasized with its overarching goals,

1. to strengthen interdisciplinary cooperation between universities in general,

2. to present an "Options Report on the Implementation of the SDGs in Austria" in the medium term by 2021,

3. to make a significant contribution to sustainable development in Austria in the long term, and

4. to anchor sustainable development at universities in teaching and research.

Performance of the cooperation partners

The universities involved according to Annex 1 have agreed on two basic forms of active participation in the UniNEtZ project, referred to as "sponsorship" of an SDG and "participation" in an SDG. The following understanding applies:

Sponsorship: a university (or two universities together) agrees to the Austria-wide coordination of all those participating in the SDG with regard to the preparation of the options report.

Participation: A university, alone or in cooperation with other universities, agrees to actively work on an SDG coordinated by another university with regard to the preparation of the options report.

Status of university sponsorships/participations by SDGs and priority areas (SPs): 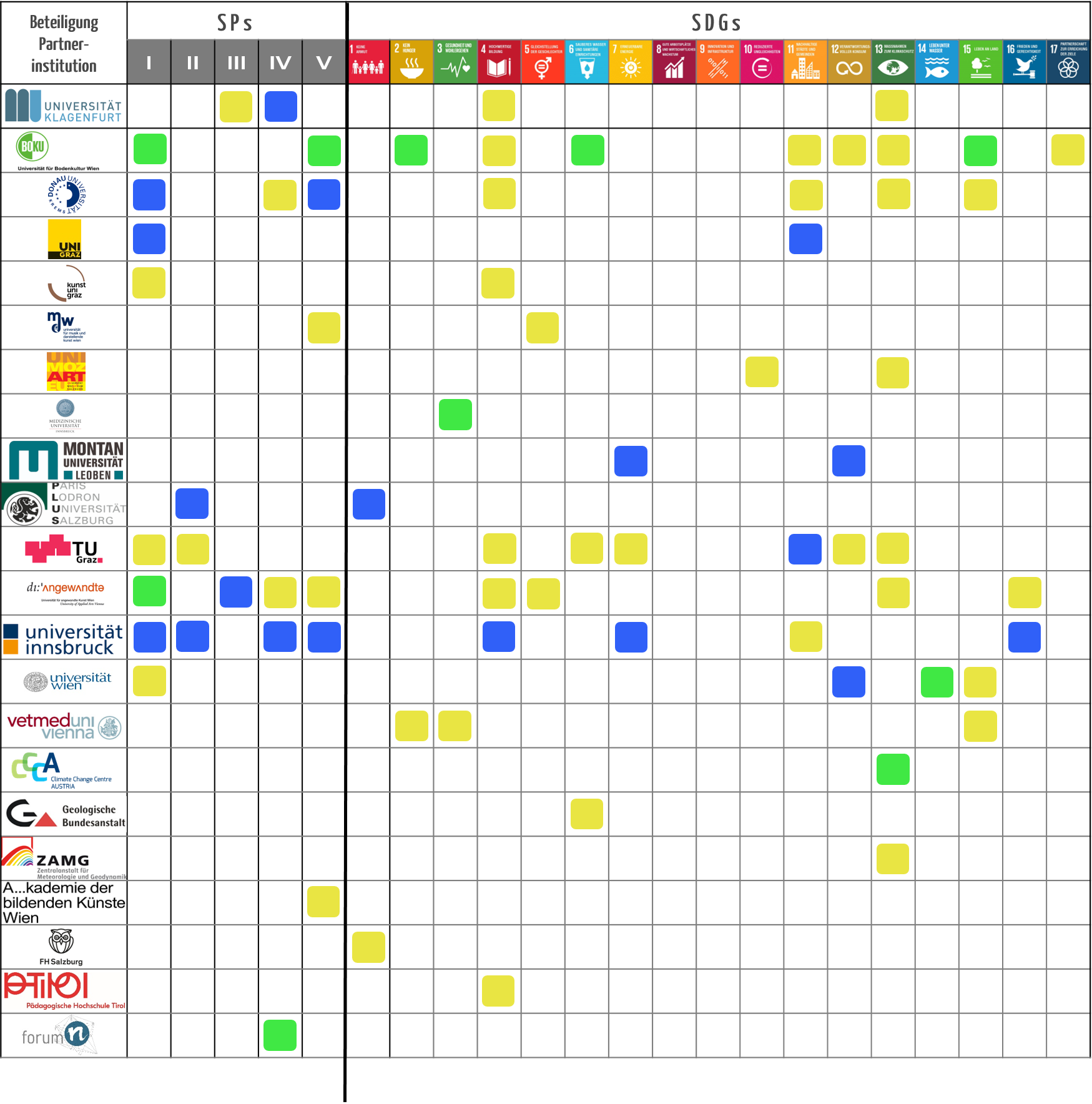 Start and duration of the cooperation

From the beginning, the involvement of and cooperation with students has been one of the central concerns. As an Austria-wide student association, Forum n acts as a bridge between students and other university members. They represent the interests of students in the SDG committee and in the UniNEtZ council and take over the sponsorship for the Priority Area IV "Transformation in the Field of Action Teaching".

You can find more information about forum n here.

All students are also welcome to get involved in the various UniNEtZ groups. To do so, simply contact the Student Coordination (studierende@uninetz.at).

The Social Media Team, consisting of Stefanie Preiml and Lisa-Marie Weidl, manages the social media channels on Facebook and Instagram of UniNEtZ. Enquiries are welcome via the messengers of both channels.